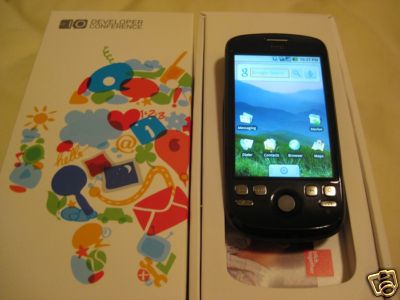 With one hand, they receive. With another hand, they don’t give away. Instead, that other hand is being used to cash in on an opportunity. Over in San Francisco, there is the Google I/O Android development conference and attendees were lucky enough to receive a special edition HTC Magic smartphone that is being dubbed the Ion phone. Not surprisingly, these phones have now popped up on eBay.

This is a completely unreleased cell phone and it was only made available (for free) to attendees at the Google I/O Android development conference. As such, the HTC Ion (or is it the Google Ion?) is going to fetch a pretty penny on the world’s largest online auction site.

On the surface, the HTC Ion will look a lot like the HTC Magic, which you may also know unofficially as the Google G2. The Ion is loaded with Android 1.5 Cupcake and it is unlocked to run on any network. It has quad-band GSM and dual-band WCDMA (1700/2100) to work with the T-Mobile USA network. Most sellers are also include the free SIM card that Google provided, giving you one month of “free” T-Mobile 3G service.

At the time this post was published, the going price for one of these special edition Google Ion phones from the I/O Conference appears to be north of US$700 and rising. If you’re in Canada, it might be better to wait until next week to get a subsidized HTC Magic from Rogers instead.