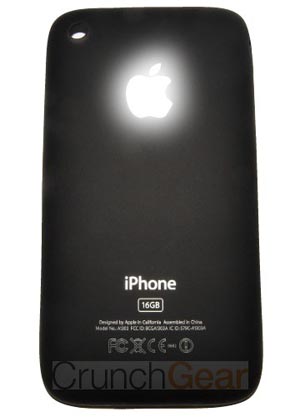 When the first Apple iPhone hit the market in 2007, we were offered a full metal back that looked awfully sleek. When the iPhone 3G arrived in 2008, that back was swapped out for a glossy plastic number. When the next-generation iPhone comes to light next month, it seems that it will literally come to light with a glowing Apple logo.

Chalk this one up to rumor for the time being, but there are reports that the upcoming iPhone update will involve an Apple logo on the back of the phone tha lights up while it is being used. This is much the same kind of effect that you already see with the MacBook family of laptops from Apple.

While I certainly think that this adds a huge dash of style to the touchscreen smartphone, I’m wondering if the added battery draw is worth it or not.

A lot of people are already unpleased with the amount of battery life that they are getting as is, since so many 3G smartphones rip through their batteries in under a day. By adding yet another feature that pulls on that battery life, can we expect to be plugged into a wall outlet or USB port all the time?

I’ll believe it when I see it for real. On a semi-related note, we’re also hearing that the next iPhone will have a matte plastic back this time around, since some folks weren’t too pleased with the fingerprint-attracting glossiness of the current iPhone 3G.