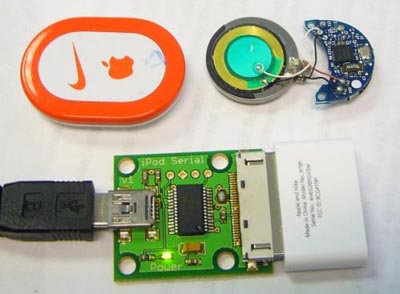 It can be such a pain having to take a key out of your pocket, inserting said key into the appropriate lock, and turning that key to open up a door. Who has that kind of time anymore? Well, at least one guy decided to do something about it, hacking up a Nike+iPod kit into a very effectively keyless entry system.

This custom creation, as far as I can tell, can effectively replace his car key altogether, assuming that his car has that push start system that we see in some models these days. Instead of having to take out his key, he just has to come in proximity of the doors and it’ll unlocked. Unfortunately, it doesn’t seem that he’s got it working with push start yet, so he still needs a physical key to start the car.

How did he do it? A Nike+iPod kit was mated with a key fob and an Arduino Pro Mini. The net result is what the genius modder decides to call the iFOB. If he were to outfit the locks to his home and other places with a similar system as the keyless entry system on his car, he could get away with a single iFOB that unlocks everything around him.

This sounds like it could be a very convenient solution, but I’d be a little hesitant due to security risks. If you’re brave enough to try something like this on your own, you can see the tutorial on Sparkfun. He says that it “was actually not too hard.”