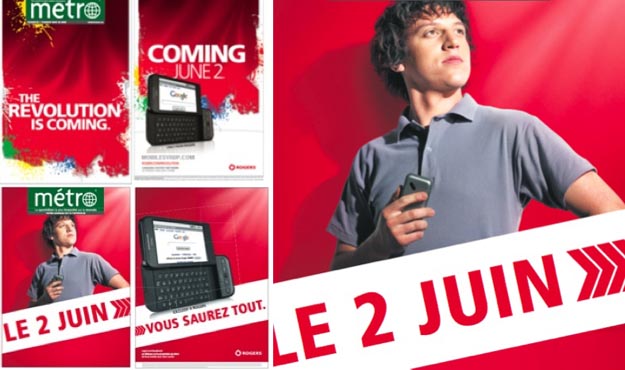 We’re continuing to count down to the day of the Android Revolution in Canada and it seems that Rogers is ready to kick their promotion into high gear. The HTC Dream, which you may already know as the T-Mobile G1, will be launching with Rogers Wireless on June 2 and the Canadian carrier is making sure you know it.

Rogers has launched a huge ad campaign, telling us that “the revolution is coming” on June 2. The ads have been purchased in all of the Metro newspapers across the country. This includes editions of the paper in VAncouver, Calgary, Edmonton, Ottawa, Toronto, Montreal, and Halifax.

The page takes over the front page of the Metro paper as well as the inside cover (page 2). Naturally, the paper being sold in Montreal comes with French text instead. Also, the Montreal version is the only one with a person on the cover and he’s in a pose that reminds me of Napoleon for some reason.

Either way, you know the new phone is coming and they’re hoping you’ll want to join the revolution. Are you in? It’s interesting that both ads feature the HTC Dream with no display of the HTC Magic. Should we still assume that the latter will launch at the same time?