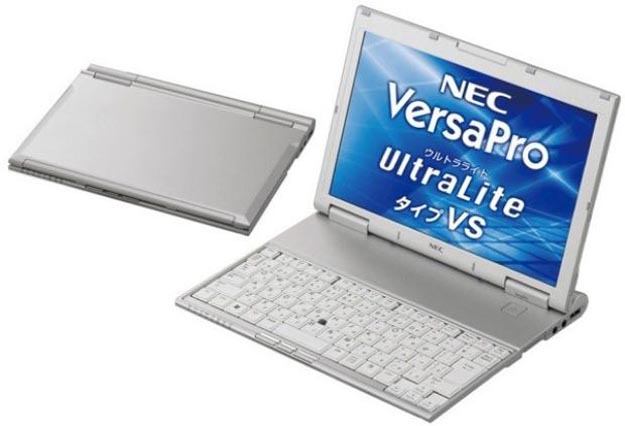 While most netbooks on the market today are already pretty small, they still may not be quite light enough for some people. Well, it’s not going to get much lighter than the new NEC VersaPro Ultralite VS netbook. As its name implies, this little computer is ultra light, tipping the scales at a mere 1.5 pounds. It’s also only about an inch thick.

The specs on this portable computer appear to be pretty much in line with other netbooks on the market, getting slight bumps in a couple of areas. Rather than the usual Intel Atom N270 that everyone seems to get these days, the NEC VersaPro Ultralite VS gets a 1.86GHZ Atom Z540 for improved performance and battery life. They say that the standard battery will give you about four hours, whereas the extended battery gets up to eight hours.

The 10.6-inch display is a touch bigger than most netbooks and it comes with a better 1280×768 resolution as well. Rounding out the specs are up to 1GB of RAM and your choice of either Windows XP or Vista Business. At its thinnest point, the VersaPro UltraLite VS is just 0.62 inches, ramping up to 1.17 inches at its thickest point.

This is all well and good, but there are two huge downers on this story. First, it looks like only Japan will be getting their hands (officially) on this netbook when it launches at the end of July. Second, it’s going to cost over $1800. That’s the price of four netbooks or more!