T-Mobile’s tight grasp on the Google Android market in the United States is about to get loosened, because it seems that AT&T is picking up no fewer than two new handsets that will come powered by the Google Android platform. And they’re both sliders too.

First up is the HTC Lancaster on the left, a phone that’s being touted as the consumer social messaging device. If you didn’t know any better, you would assume that the Lancaster is yet another Windows Mobile slider phone from HTC, but they’ve loaded it with Google Android this time around.

In terms of features, you can expect an AT&T standard UI, a 2.8″ QVGA resolution touchscreen display, dual-band HSDPA, a unique HTC Social Messaging interface, aGPS, 3 megapixel fixed focus camera, music and video playback, and expandable memory. The leak points toward a launch on August 3rd with a six month exclusive at AT&T.

Next up, we have the Motorola Heron, a vertically sliding smartphone that we first saw as the Motorola Ironman. You get a full QWERTY keyboard, dual-band HSDPA/HSUPA, 2.6″ QVGA screen, 3 megapixel camera, and aGPS. 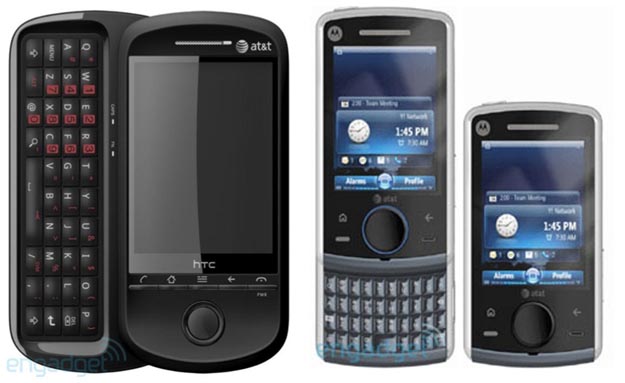