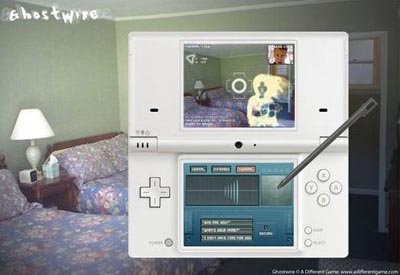 One of the reasons why I haven’t picked up a Nintendo DSi just yet is that I don’t see too many titles that take advantage of the DSi specific features. My DS Lite is doing just fine for now, but if more games like Ghostwire are coming down the line, I just may be motivated to buy the new handheld.

Developed by a studio in Sweden called A Different Game, Ghostwire offers an experience in augmented reality. Rather than being thrown into a virtual world through the pair of screens on the Nintendo DSi, Ghostwire uses the outward pointing camera on the DSi to bring the real world into the game.

The kicker is that you can then use the real-time feed of the outside world to seek out real ghosts, ghouls, and other hauntingly-frightening visitors. Based on the provided screenshot, it looks like sound comes into play as well, so you could be trying to hear the ghosts as well.

Ghostwire looks like it could be a great game for the Nintendo DSi if it’s done right, but A Different Game has yet to announce any sort of launch info. Hopefully, it’s not just vaporware.