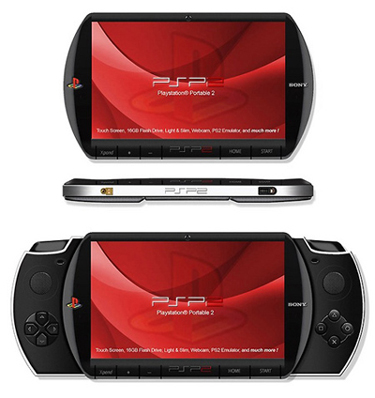 ﻿We are just one week away from the E3 Expo in Los Angeles, so that also means that we could be just one week out from several big announcements from some of the biggest companies in the video game industry. It’s there that Microsoft will be showing off its Wii Remote-like motion-sensitive controller, for example, but the guys at Sony may have a few tricks up their sleeves as well.

One of the biggest stories leading up to E3 this year is the possibility of a new slim PS3, but what about the portable market? There have been talks of brand new Sony PlayStation Portable hardware for what feels like an eternity and E3 just may be able to offer the perfect stage for a PSP2 of some kind. The current PSP Slim offered a few upgrades over its chubbier predecessor and this new upgrade could provide for an even bigger leap.

Opening Up a Full PSP Shop

Based on what is currently going around in the rumor mill, a distinct possibility for the new Sony PSP would place it in direct competition against both the recently released Nintendo DSi as well as the Apple iPod touch. How so? Well, one of the hottest trends these days are downloadable applications and other similar content. We buy our music from iTunes, we get new games via the App Store, and so on. The PSP could take on a similar approach.

As you may recall, the Nintendo DSi comes with something called DSiWare and this allows players to download new games over a Wi-Fi connection using Nintendo’s DSi-specific currency. These aren’t going to be quite as big and complex as retail games, of course, working in the same way as Xbox Live Arcade titles or games for the Apple iPhone. The PSP can do much the same, except it would go well beyond just games. It always has. It’s always been marketed as a portable multimedia entertainment machine.

With the fuller extension of the PlayStation Network over to the new PSP, gamers would not only be able to access game demos and other game-related downloadable content, but Sony could very well open up an Internet-based storefront where PSP owners could buy music, rent movies, and access other forms of entertainment. Think of it as a portable version of iTunes, but Sony-branded and for the PSP. Portable movie and TV rentals (and purchases) could certainly help with Sony’s revenue projections.

Redesigning the Handheld for Scale

That’s one side of the equation for a new PSP. The other side would have to deal with the hardware. For me, the PSP has always been a little too big to be considered just as portable as an iPod or Nintendo DS. It’s bulky by comparison, so I’d really want to see Sony do something about making the PSP more compact. Of the proposed concepts that have floated through over the last couple of years, perhaps the most viable are those that offer slide-out control schemes.

This way, the screen can remain about the same size and the controls would only pop out when needed. The PSP has always prided itself in offering better graphics and a higher resolution display compared to the Nintendo equivalent, so this kind of design would allow them to do that.

Further to the expanded PSN for the PSP, you’d expect that Sony would outfit the new PSP with some internal memory. The Memory Stick slot serves its purpose, I suppose, but internal memory like the iPhone and iPod touch would definitely give the PSP another leg up on the DSi. I’m thinking somewhere along the lines of 8GB or 16GB would be reasonably adequate, but it’d be good if they kept expandable memory as an additional option as well.

Looking ahead to this year’s E3, I’m trying to remain optimistic about a new PSP of some kind. Sony is really hurting in today’s market, despite dominating the video game world during the PlayStation 2 era. The PSP, with some new hardware and software upgrades, could bring some promise, but Sony really needs to change its game if it wants to enjoy its former glory.