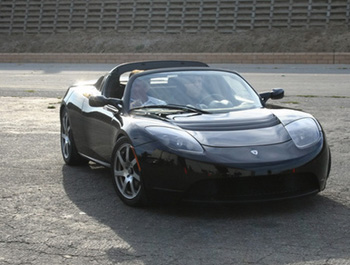 Earlier this week, we caught wind that Daimler is purchasing a 10% stake in Tesla Motors. The idea isn’t so much for the German automaker to cash in on the sales of the Tesla Roadster and Tesla Model S as much as it is about the partnership that will soon yield electric Mercedes cars. The first electric Mercedes-Benz is being slated for next year with the option for full-electric Mercs hitting the entire line by 2012.

With this news and the merging development of a full-electric Toyota Prius (among other vehicles), we’re almost led to believe that the concept of a plug-in electric car is the wave of the future. We will no longer be bound to the prices at the pump, because we’ll just plug our cars into wall outlets when we get home. Nothing could be more convenient and economical, right?

I beg to differ.

There are two very pressing reasons why plug-in electrics may sound like fun but cannot be viable in the long term, at least based on what we know so far about the technology.

First, the convenience factor simply is not there. With current diesel and gasoline-powered vehicles, you can hit up the gas station when you run low and top up your tank as needed. You effectively have near limitless range, so long as you have access to gas stations. The fill up process only takes a couple of minutes. With plug-in electrics, you typically have to plug in the car overnight and even then, the range isn’t astounding.

This is fine for the daily commute to the office, since it’s unlikely you’ll be racking up more than a couple hundred kilometres driving to work, but what about longer trips? You can’t possibly take a road trip and the tech is not viable for work vehicles like taxicabs.

A proposed solution would involve a network of power plugs like the one shown here:

The idea is that you get yourself a smart card linked to your electricity account, you tap the card when you arrive at a station (like at the parking lot at work), and you plug in the car while you imprison yourself in your cubicle. This way, the battery can keep getting charged. However, this still doesn’t work for extended driving. The convenience factor simply is not there and until it is, perhaps with some miraculous “instant charging” technology, this won’t work.

Second, since the electric car itself does not have any harmful emissions, many people assume that these cars are as clean as can be. However, all they do is divert the environmental impact back to wherever you get your electricity.

An electric car may be a little greener than its internal combustion-powered counterpart, but it’s still polluting by proxy. Further still, I don’t think that the current electric infrastructure can handle the increased demand from millions of electric cars. Something fundamental has to change.

Then What is the Future?

Hybrids? No, I don’t think so. They’re an intermediary, because they still rely on gasoline to a certain extent. We’re going to run out of that stuff eventually, so we need our vehicles to run on a renewable “green” energy.

Solar? That’s not generating enough power to push a car at an adequate speed just yet. The solar panels can be useful for secondary applications, like your radio or air conditioning, but not for propelling the car.

It may sound a little dangerous and a little scary, but I really think that hydrogen fuel cells are the wave of the future. You are effectively driving a hydrogen bomb, but our current cars are also powered by controlled, rhythmic explosions. With hydrogen fuel cells, you can top up at a hydrogen station, just like how you do now at a gas station. This addresses the convenience factor and hydrogen is an inherently green energy. They need to improve the efficiency and safety, but this, I feel, is the way to go.

Are you listening, Detroit? (…and Japan… and Germany.) Make it happen.