The Palm Pre could be the hottest things since sliced bread when it hits the shelves of Sprint early next month, but all that shimmers may not be gold. As cool as the new smartphone may be, it may be lacking in one department that is getting increasingly popular with the techie crowd: visual voicemail.

Yes, I understand that the Palm Pre and the Apple iPhone are two separate devices, but it’s also very clear that they are competing directly against one another for a healthy market share. The lack of visual voicemail has not been directly confirmed, but the official Palm Twitter account seems to be leading us in that direction.

When asked if the Pre would have visual voicemail, the Palm representative said tha “Palm Synergy presents integrated messaging in lots of useful ways, but not that particular way.” This sure sounds like visual voicemail is not a part of their equation, but it leaves the possibility for something similar, possibly even superior.

Even if the Palm Pre and Sprint do no support Visual Voicemail out of the box, it is very well possible that users will be able to make use of third party solutions, like SpinVox or PhoneTag, to effectively get the same thing. You know, unless they block the installation of said solutions. 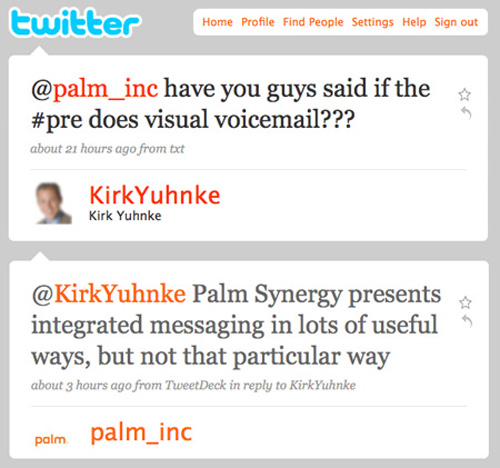