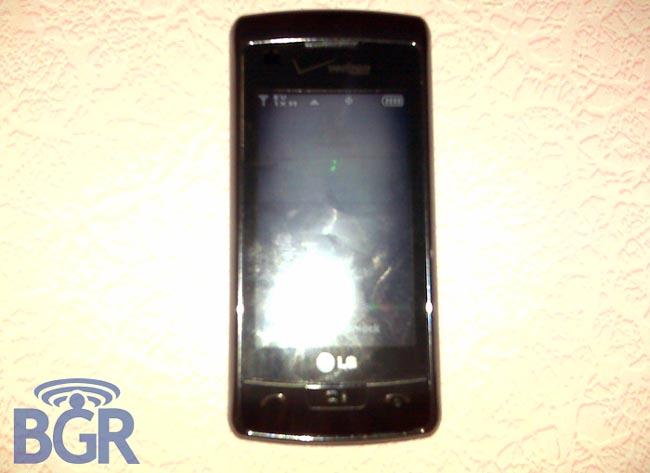 While Verizon Wireless doesn’t have an Apple iPhone just yet, that doesn’t mean that the red checkmark of a wireless carrier is going to be without a touchscreen-equipped multimedia phone in the meantime. Following up on some LG phones that we’ve already seen in the past is the upcoming LG enV Touch for Verizon Wireless. And it should be ready as early as June 5th.

That’s around the same time that the Palm Pre will be hitting shelves for Sprint and it’s just about WWDC where we may (or may not) get a new iPhone, so the timing is a little curious. Maybe it’s a case of “me too”, since Verizon wants to remind us that they have “cool” touchscreen phones too.

I’ve reviewed both the LG enV2 and the LG Voyager, so this latest introduction is fairly familiar territory. Based on the single blurry picture, the LG enV Touch will be more Voyager than enV with a big 3-inch touchscreen and minimal keys on the front.

Other supposed specs on this phone include an internal 3-inch screen (both displays at 800×480), a keyboard, 3.2 megapixel camera with Schneider-Kreuznach lens, 3.5mm headset jack, EVDO Rev.A connectivity, HTML web browser, microSD expansion, and a document viewer.

Expect to pay about $219.99 with a $70 mail-in rebate and a two-year contract. That’s twenty bucks more than a Pre or iPhone, Verizon! What are you thinking?