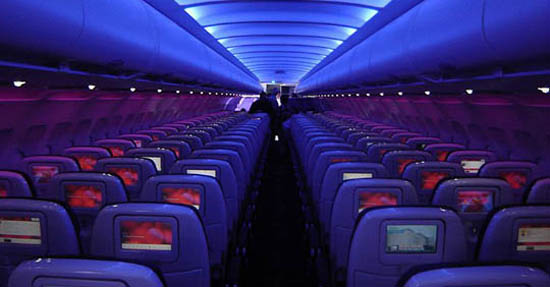 I don’t really mind flying, so long as they’re short trips. I can listen to my iPod or try to get a little work done on my laptop. That said, using my laptop without Internet is like eating a burger without fries. It’s just not the same. Virgin America feels the same way.

While some other airlines are outfitting select aircraft on select routes for in-flight Wi-Fi, Virgin America is painting a much broader stroke across its fleet. The Richard Branson-owned airline has just announced that it will be the first airline in the world to offer in-flight Wi-Fi on every single flight.

The company is opting for the Gogo in-flight Wi-Fi service solution from Aircell, putting the Internet into the hands of each and every passenger. This comes at a price, of course, just like when you bring on the extra baggage or opt for that glass of boxed red wine from the flight attendant.

Handheld devices, like an iPod touch, get access to the Wi-Fi starting at $7.95 per flight. If you’re on the plane for less than three hours, your notebook can hop on the ‘net for $9.95. Anything longer than that and you’ll be forking over $12.95, unless you’re on a red-eye. In that case, Internet is only $5.95. I hope the speeds are acceptable.

Virgin America is commemorating the occasion with an air-to-ground Skype video call with Oprah Winfrey tomorrow. I wonder if the Oprah will tweet about this too.