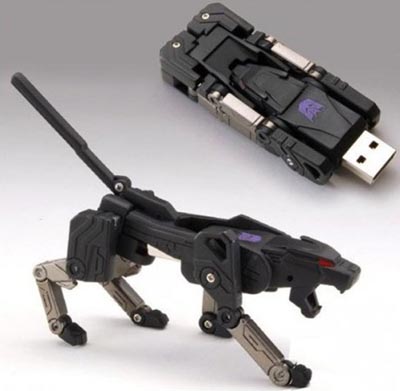 When I was a kick, I always got a kick out of the Transformers action figures that I was able to get at the toy store. They were unlike all the other toys there because, well, they were able to transform. Dinobot Grimlock was a personal favorite of mine, because he had that little dude that would ride in the middle of his back.

Ravage was also very cool and with the new Revenge of the Fallen movie coming out next month, it’s only fitting that we get outfitted with more Transformers toys. This time around, however, the toys are so much more than “just” toys. They’re useful pieces of technology.

What you see here is a USB drive filled with all sorts of awesome and win. While folded up, it may look like one clunky USB flash drive. Fully deployed, however, you get the legendary Ravage of the Decepticons. There’s so much more than meets the eye!

The good news is that this is going to be the coolest flash drive in your collection. The bad news is that it will likely be one of the least useful, because it only comes with 2GB of memory and it’s probably a little fragile with all those moving parts. We should also note that it’s a little pricey at $42.99.

If you plan on hanging on to this for future sci-fi conventions and trade shows, toss in an extra two bucks to BigBadToyStore and they’ll wrap up the USB-driven Ravage in collector’s grade packaging.