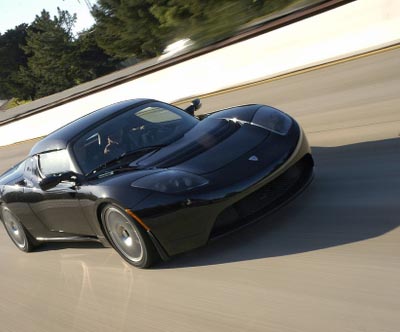 One of the more exciting cars to come along in a while is the Tesla Roadster, but Tesla Motors is still very much a niche company. That may soon change, because Daimler has decided to take a 10 percent stake in the Silicon Valley-based electric car company.

After a less than successful run with Chrylser, it seems that Daimler is looking for new and more future-friendly partnerships. The goal here isn’t so much to profit from the sale of the Tesla Roadster, per se, as much as it is to use the Tesla electric technology in future Mercedes-Benz vehicles.

Mercedes already has a fleet of 100 Smart cars that have been outfitted with Tesla’s lithium-ion batteries and the electric Smart car is slowly moving into limited production. With this increased stake in Tesla, Daimler looks to be moving forward with its Mercedes-branded battery-powered car in 2010.

But that’s not where it ends. The current ambition is pointing toward the possibility of having a battery-powered option for all Mercedes-Benz models by 2012. That’s pretty ambitious, but it’s in line with Daimler’s current “green” view. You may already be familiar with the Bluetec diesel technology, for example.

Tesla has noted that while it needs more money to produce its $50,000 Tesla Model S, the partnership with Daimler is not an exclusive one. This investment “does not preclude Tesla from growing such relationships with other automoative OEMs.” Should we be looking forward to Tesla-powered BMWs and Acuras?