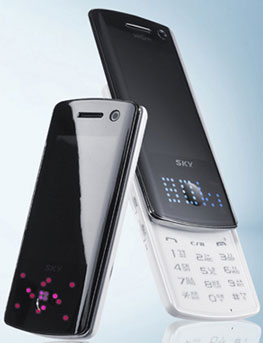 While some other cell phone companies have been in business for a little longer than a decade, this is still quite the monumental milestone for the sometimes overlooked firm from Korea. Pantech is celebrating the company’s 10th anniversary with the release of the Pantech SKY IM-U440 Hommage slider phone.

I always thought that it was spelled “homage”, but I guess Pantech wanted to ensure that they could patent the name. In any case, the SKY IM-U440 doesn’t really bring anything novel to the game, instead taking some of the better elements from Pantech’s older library of handsets. For starters, it’s a slider… and a stylish one at that.

Perhaps the most notable feature on the Pantech SKY IM-U440 Hommage is the array of 112 multicolor LEDs placed beneath the screen where you would normally find a five-way navigator. As far as I can tell, this section offers touch-sensitive controls, but the LEDs are there to indicate the phone’s current mode or other pertinent information.

The Hommage will be made available to SK Telecom and KTF. No word on price.