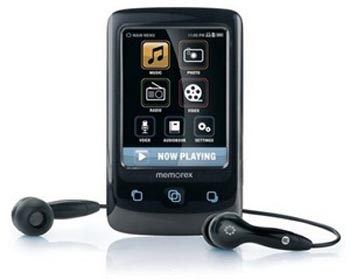 Is the Apple iPod touch a little too expensive for your blood? Are the touchscreen media players from Samsung still a little too pricey? Memorex has a more affordable option.

Usually when it comes to cheaper alternatives, you have to make a lot of huge sacrifices, but this does not appear to be the case with the Memorex TouchMP. Dubbed the “iPod touch for cheapies” by Gizmodo, the $100 personal media player boasts a touchscreen display and 8GB of internal memory. By comparison, the 8GB iPod touch is $229.

According to the CNET review, no one is going to mistake this music player for an iPhone, but Memorex TouchMP “does a surprisingly good job keeping the onscreen interface simple, legible, and intuitive.” You’ll make some sacrifices, to be sure, but this is the “first MP3 player we’ve seen that combines touch-screen technology, useful features, and an attractive design, for less than $100.”

Considering that you are spending less than half the price of the equivalent iPod touch, you are getting at least half the value and versatility. The Memorex TouchMP looks like it could be the recession special for people on tighter budgets.