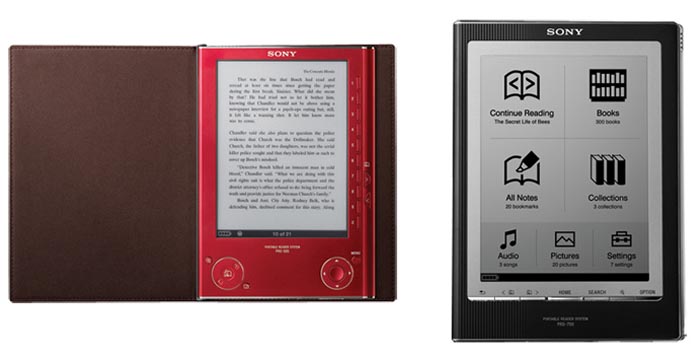 We hear all of this terrific news about the Amazon Kindle and how convenient it is to use WhisperNet to download new books on the fly, but it’s very frustrating for Canadians since we’re being left out in the cold. Again. While you won’t get the full functionality out of the Kindle in Canada just yet, Best Buy is offering you a few e-book alternatives from Sony.

The whole eBook Reader thing seems to be exploding on the scene, so Best Buy has officially launched a couple of Sony digital e-book readers for you to consider. They don’t get the WhisperNet functionality of the Kindle, but you can still buy your e-books and load them up via USB.

To one-up the Kindle, the Sony PRS-505S/R and the Sony PRS-700 both come equipped with a six-inch touchscreen display. You like touchscreens, right? The PRS-505S and PRS-505R, priced at $349.99, are effectively the same unit except the are coated in silver and red, respectively. The more expensive Sony PRS-700 is $449.99.

Best Buy Canada, based on the website information, has been selling the Sony eBook readers for almost a month, but they’re giving it another push through the newsletter, possibly in response to the recent news of the Amazon Kindle DX and all the media attention that the device is getting as a result.

UPDATE (05/13/09): Apparently, the Best Buy site is mistaken, because the PRS-505 series does not appear to have a touchscreen after all. Sorry for any confusion.