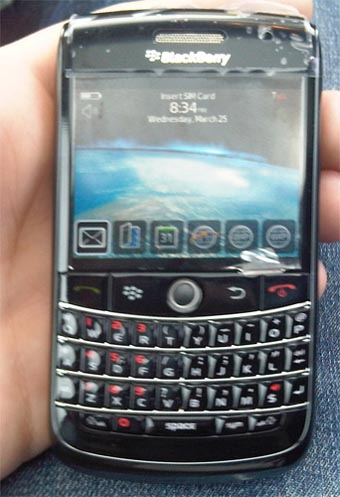 A lot of people prefer the BlackBerry Curve 8900 (Javelin) over the Bold 9000, but it sucks that the 8900 doesn’t have 3G. It seems that RIM is going to fix that with the upcoming BlackBerry Onyx and Driftwood this fall.

From what we hear, the phone is bound for T-Mobile and it will likely boast full UMA support. Other notable specs include AWS 1700 MHz and 2100 MHz UMTS/HSDPA, 3.2 megapixel autofocus camera, GPS, Wi-Fi, optical trackpad, 480×360 screen, carbon fiber-like back cover, and a “much sexier” appearance than the 8900.

From what we hear, the BlackBerry Driftwood/Onyx will likely launch as the BlackBerry Curve 9600, ushering in a new era of 96xx series devices from RIM. This will be the first 3G Berry for T-Mo and it’ll likely go for about $199 with a 2-year.