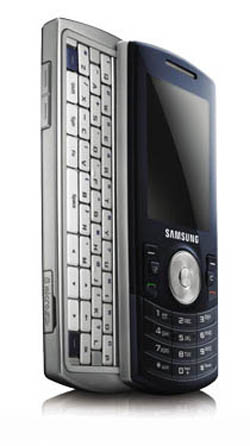 Aside from the growing interest in smartphones among the non-corporate market, it seems that one of the bigger trends in the Canadian cell phone landscape lately is the growing popularity of QWERTY “dumb” phones. These are regular phones tha just so happen to have full QWERTY keyboards for texting and email purposes. Bell’s continuing this trend.

A blue version of the Samsung Vice mobile phone has been officially launched by the good people at Bell, offering yet another sliding QWERTY option to the SMS enthusiasts in the crowd. While in its closed position, the Vice looks like a regular candybar with a numeric keypad, but there’s a full QWERTY keyboard that slides out of the left side.

Aside from this text-happy feature, the Samsung Vice is also equipped with a 2 megapixel camera, integrated MP3 player, built-in Bluetooth connectivity, a 3.5mm headphone jack, GPS, and an expandable memory card slot good for an additional 8GB of storage. It’ll also do the Bell NHL on Demand stuff.