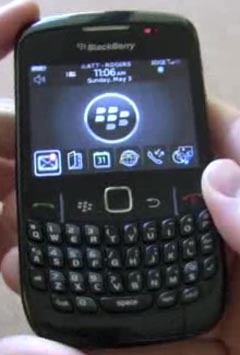 A short while ago, you may have caught a glimpse at the upcoming BlackBerry 8520 Curve, the smartphone that was once known by its Gemini codename. You may remember how RIM replaced the now-standard trackball with an “optical trackpad”, providing for a sleeker overall appearance.

If you’re looking to get into the “optical trackpad” action of the BlackBerry Curve 8520, you may want to turn your attention to T-Mobile later this year. The smartphone is being tentatively scheduled for a Q4 2009 launch with T-Mobile. That this year, albeit at the tail end of the year.

Even though the Curve 8520 boasts the nifty “upgrade” of a new navigational feature, it seems that Research in Motion plans on selling the Gemini as a budget-minded Curve, particularly for emerging markets. I guess this follows in the strategy that has now taken the Curve 8300 series to the top of the heap.

Aside from the new trackpad, the BlackBerry Curve 8520 has specs that include a 2 megapixel camera (with fixed focus and no flash), microSD slot, QVGA display, Wi-Fi, Bluetooth 2.0+EDR, and quad-band GSM/EDGE. There’s no mention of 3G or GPS.