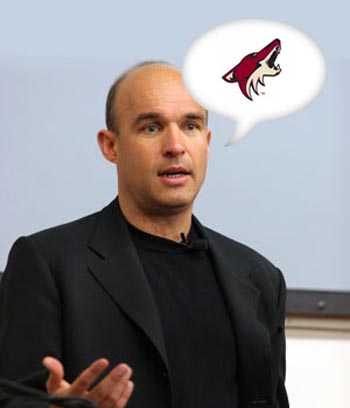 I guess the BlackBerry Storm is doing pretty well for itself, because Jim Balsillie is looking to expand his interests beyond the corporate smartphone market. Jim Balsillie is the co-CEO of Research in Motion and he has officially placed a bid to buy the Phoenix Coyotes.

This isn’t the first time that Balsillie has expressed interest in buying an NHL hockey team. He’s tried his hand at buying the Pittsburgh Penguins and Nashville Predators before. Both of those attempts didn’t pan out, but this one just might.

The Phoenix Coyotes filed for Chapter 11 bankruptcy and they are now accepting offers. Jim Balsillie has offered US$212.5 million to buy the team, but his bid is contingent of moving the team to Southern Ontario. The bid isn’t more specific than that, but Hamilton is a good possibility.

It seems unlikely, at this point, that anyone will want to outbid Balsillie to keep the desert dogs in Arizona, so there is a very real possibility that we could be getting a third NHL team in Ontario, joining the Ottawa Senators and the Toronto Maple Leafs.

I wonder if all of the new Coyotes management would be given free BlackBerry smartphones as part of the deal. Just don’t rename the team as the Hamilton Pearls, mmmkay?