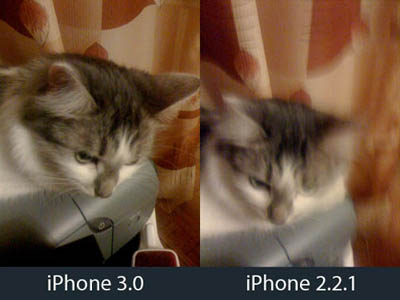 The upcoming iPhone 3.0 firmware is supposed to bring about all sorts of fantastic upgrades. One of these happens to be improved photos taken using the iPhone’s camera.

We’ve already heard that the next-generation iPhone will likely tout a 3.2 megapixel camera rather than the 2.0 megapixel one that the current unit gets, but that’s on the hardware side of things. It turns out that the firmware/software is also vastly improved, significantly reducing blur and increasing dark detail.

What this means is that even if you don’t buy a new iPhone this summer, your old iPhone will be able to take better pictures. Check out the side-by-side comparison shown here. The kitty shot with iPhone 3.0 is decidedly less blurry than the same cat shot using iPhone 2.2.1. Presumably, this anti-shake technology makes some use of the iPhone’s motion sensor.

Detail in darker shots is still quite grainy with iPhone 3.0, but they say that the detail is vastly improved. Since new firmware can work wonders on standalone digital cameras and SLRs, a similar software upgrade on the iPhone can bring about similar advancements.