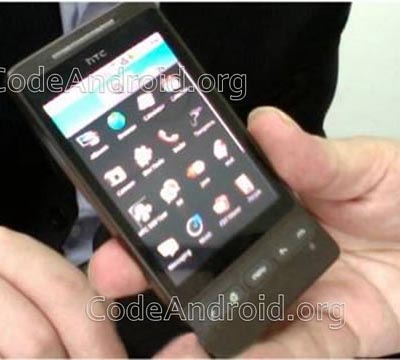 The world of Google Android sounds like it’s going to get a lot more crowded this year. We’re hearing about no fewer than four additional Android phones that are coming down the chute, including the so-called HTC Hero smartphone shown here.

CodeAndroid was able to grab some live pictures of the upcoming Android-powered smartphone from HTC, the same company that produced the current T-Mobile G1 (also known as the HTC Dream G1). From what I can see, the HTC Hero may not have the QWERTY keyboard of the G1, but it seems to have a standard 3.5mm audio jack. That’s a first for Android, apparently.

It seems that one of the more prominent characteristics of Android phones from HTC thus far is the “chin” and the HTC Hero seems to have even more Jay Leno in its DNA. That thing really sticks out!

But wait. There’s more. You may have already heard about the upcoming HTC Magic (which you may also know as the Sapphire or MyTouch 3G), but it seems that T-Mobile could be getting a third Android phone from HTC, currently codenamed as the HTC Bigfoot. The Bigfoot is more like a G1 v2 device, so it may have the keyboard that’s been removed from the Magic.

As if that weren’t enough, Samsung may have yet another unannounced Google Android smartphone in the works. This secret device is being referred to as the Samsung Houdini, drawing immediate comparisons to the HTC Magic. Well, Houdini was an “illusionist” and not a “magician,” so I guess that’s a little different.