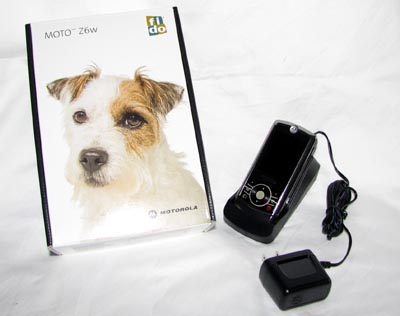 Even though Fido is being marketed as a budget brand these days, the old pooch still wants to play with some cool new toys. You won’t be completely blown away by the features on the MOTO Z6W from Fido, but it sure beats some of the generic candybars and clamshells that occupy the budget cell phone market.

Listed at just $50 with a new two-year service agreement, the MOTO Z6W from Motorola is a stylish slider phone at an affordable price. Getting beyond the looks, however, can yield its fair share of disappointments.

Since the Z6W is meant to be a budget phone for the masses, you shouldn’t expect much when it comes to the features and specifications. That said, this handset is equipped with most of the contemporary features that modern mobile phones desire, at least at the lower end of the market.

The official spec sheet only mentions support for regular microSD memory cards, but it was able to recognize and use my 8GB microSDHC card from Kingston. That should supply plenty of space for pictures and music.

The MOTO Z6W comes wrapped up in some general issue Fido packaging. Here is my early unboxing and hands-on video:

I appreciate the inclusion of the desktop charging dock station, since this is quite a bit more convenient than a regular charging cable. You can connect the phone directly to the miniUSB cable as well.

Notably missing from the included accessories are some sort of protective case and, more importantly, a memory card. If the Z6W is being sold as a feature fashion phone, it’ll want some memory for pics and tunes. Maybe this is meant to provide an upsell opportunity for retailers and resellers.

Looking at the phone head on, it looks like it could be worth more than it is. Turning it on its side, however, reveals that this slider phone is nowhere near as skinny as a comparable Samsung slider, for instance. The gut reaction gets me to compare this phone to the RAZRs and SLVRs that occupy Motorola’s lineup, and it just doesn’t measure up in the skinny department.

Further still, this phone is also heavier than it looks. I’d say that it weighs about as much as my new Nokia E71 and maybe more than the LG Neon. The MOTO Z6W may not be very wide, but it’s pretty heavy and thick for its size. This is not the light and skinny phone for fashionistas.

Build quality feels pretty good, since the phone feels fairly solid in the hand, but the added weight is a bit much. 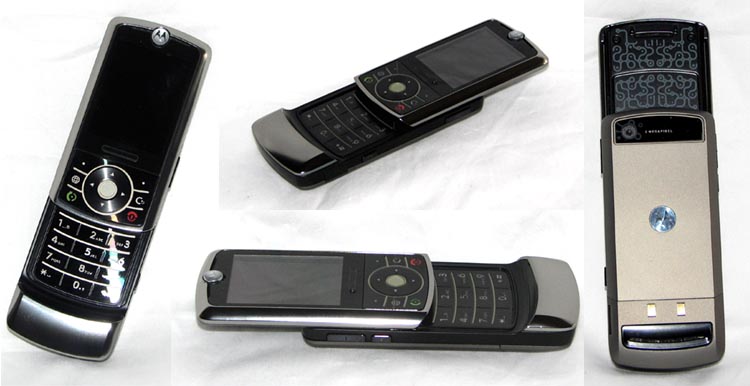 The trouble with many slider phones is the sliding mechanism can either be too flimsy or it can create for some gaps and wobbling. The MOTO Z6W suffers from neither of these concerns. If anything, the slider might feel a little too stiff at first, but this also means that you won’t accidentally open the phone. The horizontal bar under the screen is quite good for thumbnail-initiated sliding.

The keypad and five-way navigator both have a grippy rubber-like feel to them, making sure that your sweaty fingers don’t slip all over the place. I like this for the arrow keys, but not for the keypad. Given the overall form factor and aesthetic, I’d prefer the true metallic keypad of the RAZR.

Since the display is quite small and the screen resolution quite poor, not a lot can be shown on the screen at a time. This isn’t too bad for scanning through contacts, but mobile web surfing and other related tasks can be a little frustrating. The Z6W isn’t the only phone that suffers this fate, as most consumer-oriented budget phones are like this.

The call quality is respectable, I suppose, but the person on the other end seemed to come through with inconsistent volume levels. I can still hear them, but they’d be louder one moment over the next.

When it comes to a budget-minded phone like the MOTO Z6W, you have to go in with the right set of expectations. The build quality is quite impressive for a phone at this price, but the handset is bulkier and heavier than I expected. Likewise, the display and voice quality weren’t exactly impressive either.

On the feature side of things, the Z6W is well-equipped with a media player, 2 megapixel camera, microSD expansion, Wi-Fi for Fido UNO, and Bluetooth. At just $50 with contract, I’d say this phone is a pretty good value but it won’t wow even the intermediate user.