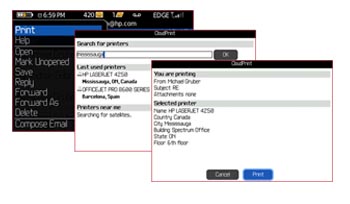 Our smartphones are so much more than just cell phones; they’ve turned into little mobile computers, so it only makes sense for us to use these smartphones as if they were our laptops. What if you have a document on your BlackBerry and you need to print it out? Thanks to a new partnership between RIM and HP, you can.

The companies are buddying up on a project called CloudPrint. In effect, you can use your BlackBerry and send your print jobs to the nearest printer. Presumably, the printer will need to be connected to the RIM-powered cloud in some way, but it means that if you’ve got pictures or documents, a physical copy can be had with just a couple of clicks. No intermediary computer needed.

If you work for a larger corporation with multiple offices in multiple cities, you can presumably connect the printers at these different locations to your employees’ BlackBerry devices. If they’re in San Francisco, they may be able to print out a document in Dallas. At least, that’s how I understand it.

In addition to CloudPrint, HP and RIM are also working on a new product called Operations Manager. This tacks on to BES 5.0 and helps with troubleshooting problems on enterprise BlackBerry devices.