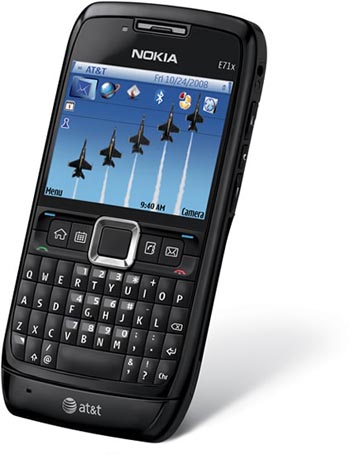 Have you been sitting with AT&T and yearning for a new Symbian smartphone, but you didn’t want to fork over the premium for an unlocked Nokia E71-2 NAM? Well, the wait is finally over.

It was announced this morning that the highly anticipated Nokia E71x is available for purchase by AT&T customers as of today. This is being marketed as the thinnest QWERTY smartphone on the market and it’s quite the stylish handset to boot. The metal body adds a lot to its overall quality feel.

The specs and features on the Nokia E71x for AT&T are much the same as the ones you’d find on the E71-2, including the 3G connectivity, Wi-Fi, music player, 3.2 megapixel autofocus camera, Bluetooth, and the Symbian S60 3rd Edition interface. The E71-2 got FP2, whereas the E71x gets the FP3 found on some newer Nokia feature phones.

Aside from the OS/UI upgrades, the Nokia E71x also gets an all-black body and the inclusion of some AT&T-specific applications like AT&T Navigator.

Lock yourself down to a two-year service agreement, deal with a $50 mail-in rebate, and you can have the Nokia E71x from AT&T for $99.99.