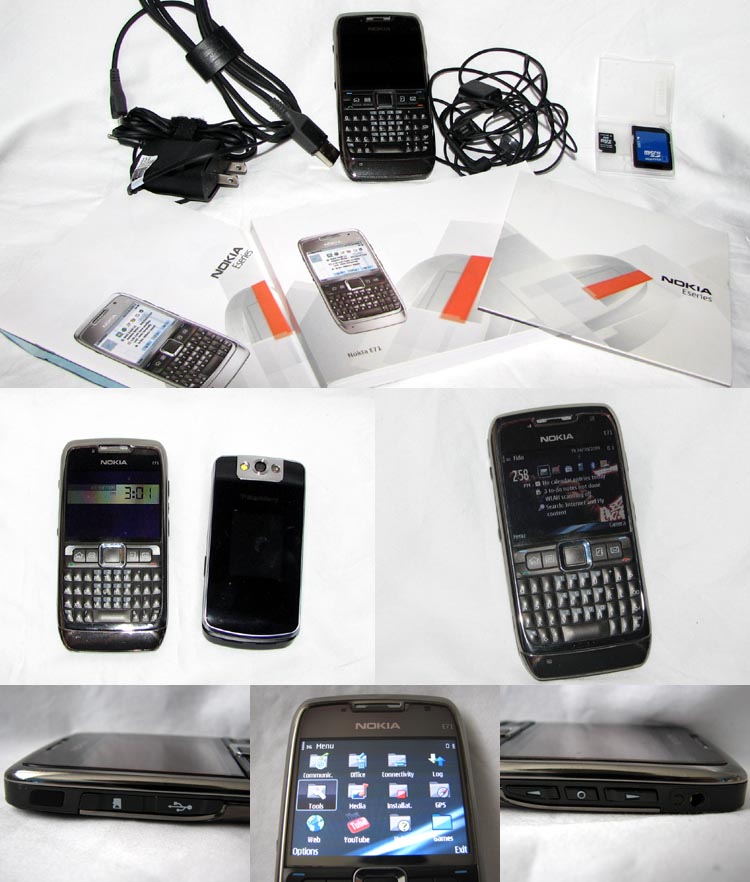 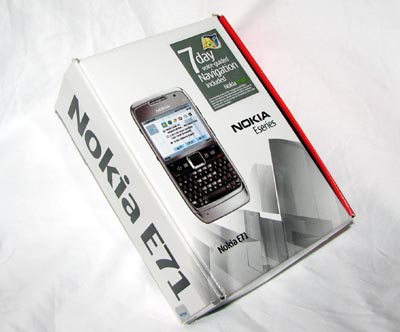 I’ve been in the market for a new smartphone for quite some time now, so it’s good that I was able to finally make a decision and stick with it. I’m not a huge fan of virtual keyboards, so I wanted a phone that had a hardware QWERTY keyboard. I was leaning toward a BlackBerry 8900, but I ultimately chose the Nokia E71.

Let’s have a look at what this phone has to offer.

The Nokia E71-2 NAM that I have is factory unlocked, though it is aesthetically and (mostly) functionally the same as the version that is being sold through Rogers Wireless. The Nokia E71x from AT&T comes in an all black housing and a couple of software-based upgrades, but it is mostly the same as well.

Most of these specs aren’t necessarily league-leading, but they don’t really dive into the bottom of the pack either, even though the E71 has been available for nearly a year. Spec for spec, it’s comparable to a BlackBerry Curve 8900.

Your mileage may vary slightly, but the contents of the box that I received were pretty comprehensive. I didn’t get any kind of case or sleeve (I bought my phone used), but I believe a generic case is also included (but obviously not pictured here).

Aside from the phone itself, the box contained the USB sync cable, wall charger, wired headset, 1GB microSD card, and supporting documentation. I immediately upgraded to an 8GB SanDisk microSDHC card and I have ordered a protective case from eBay, but that’s about all you’ll need to get started with this phone.

Since I was coming from the decidedly bulky T-Mobile MDA (HTC Wizard), the Nokia E71 felt a lot thinner by comparison. It measures a mere 10mm in thickness, making it one of the thinnest smartphones available on the market today. The metal body makes for a great first impression and I’m very happy with the build quality.

The phone has a definite sense of weight to it, but this adds to the sense of high quality materials and a quality build. It feels very solid. The screen is naturally nowhere as large as an HTC Touch HD or Apple iPhone, but that’s because it needs to accommodate the QWERTY keyboard. It’s like a thin BlackBerry.

No one will mistake the Nokia E71 for a casual feature phone, because it screams out that it is built for business, not unlike most of the handsets from the BlackBerry line.

Typing on the Keyboard

I heavily prefer hardware keyboards over virtual ones, but I’m also more accustomed to keyboards that slide out of the side of the phone. Those kinds of QWERTY keyboards typically provide larger buttons that are more spaced out. The transition to the E71’s keyboard will take a little bit of time, but people transitioning from a BlackBerry Curve, Motorola Q9h, or similar phone shouldn’t have too much trouble.

That said, the keys on the E71 are quite small. If you have chubbier fingers, this is definitely not the phone for you. Also, each row of keys is not slightly shifted, instead fitting perfectly on a grid. This may also take a little time to get used to, but I don’t really mind it at all. Key travel is perfect, tactile response is good, and accuracy (with practice) is good too.

As far as I can tell, the native mail application for the Nokia E71 does not have push capabilities, so you will need to manually update your inbox to see if you have any new messages. This helps in controlling how much wireless data you use, but it is a bit of an added hassle for people who want a constant connection to their inbox.

Similarly, the unlocked Nokia E71 that I received did not come with a pre-installed instant messaging client. It’s not hard to find (free) software to do MSN, Yahoo!, or Google Talk, but it is an added step. Overall, the system works, but it takes a touch of effort on your part.

Since the display is only QVGA (320×240), browsing full HTML websites will involve a fair bit of horizontal scrolling. Most pages that I visited rendered perfectly, but all that scrolling can get frustrating after a while. Thankfully, at the very least, there is a frame that shows your relative location on the page.

Seeing how the camera on this phone is three megapixels, is autofocus, and comes with a flash, I assumed that picture quality would be reasonably acceptable. The resulting pictures are okay, but they are far from stellar, especially when the flash is involved.

The Nokia E71-2 NAM is very clearly a business-minded device, so while there are applications for Twitter and other “fun” things like PixelPipe, the ability to send emails, check calendars, and produce Office documents sits at the forefront for this phone.

The hardware is very good. The keyboard is a little small but very usable, the camera takes decent (but not fantastic) pictures, and the build quality is utterly fantastic. The thin profile and metal housing are big selling points too.

For me, the biggest shortcoming is still the Symbian S60 interface. It looks dated compared to the snazzy style of the iPhone and Palm Pre. Nokia may be king in Europe, but if it wants its smartphones to pick up more steam in North America, they need a prettier and more intuitive version of Symbian.