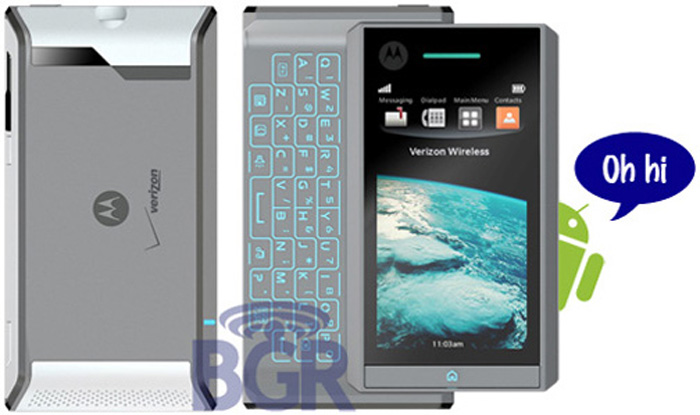 Both Motorola and Verizon have their fair share of image issues, but it seems that the two companies will soon be getting their sexy back in the form of a hot new handset. There’s word going around that the Motorola Calgary will soon be launching with Verizon and it just so happens to be powered by Google Android. Eat your heart out, T-Mobile and HTC?

The T-Mobile G1 is currently the only Android phone widely available in the United States, but the platform will soon be gaining some ground with a new phone from Samsung and now one from Motorola too.

This isn’t the first time we’ve heard about this phone either. The Motorola Calgary made its first appearance in the rumor mills last December. At the time, we knew about the slide-out QWERTY keyboard with RAZR-like etched keys. We also saw the cool cyan lighting and the seemingly touchscreen display. What we didn’t know then was that it’d come with the ‘droid.

Also leaked out last December was the Motorola Inferno, but that phone has reportedly been ditched for good. On the flip side, there’s talk of a Motorola “Rolex” that’ll use the same hardened glass display as the Aura.