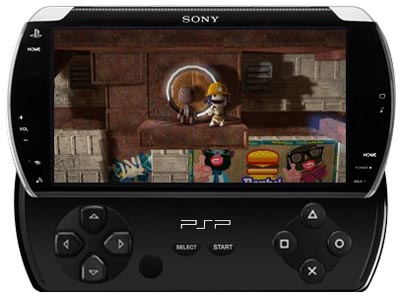 There have been rumors about a new PSP from Sony for quite some time now. Well, it seems that some of these rumors will finally come to fruition, because there’s talk that Sony will be unveiling the new PSP Go! at the E3 conference in June.

Remembering that these rumors date back as much as three years, we’ve heard everything from the death of UMD to the inclusion of internal memory. Both of these seem to be coming to pass. The new PSP was supposed to come sooner, but I guess it’s better to get it late than never at all.

This is still a rumor, but it sounds like the new Sony PSP Go! (that’s the current codename floating around) will indeed ditch the UMD drive in favor of 8GB/16GB of internal memory. It’ll also get an integrated webcam, a larger (touchscreen?) display, and slide-out controls. There won’t be a right analog stick, however.

Naturally, Sony refuses to comment on the speculation and the picture shown here is just an unofficial mockup. Should the rumors hold up, Sony will make the announcement at E3, launching the PSP Go! in Japan in September with the US following suit in late October or early November.