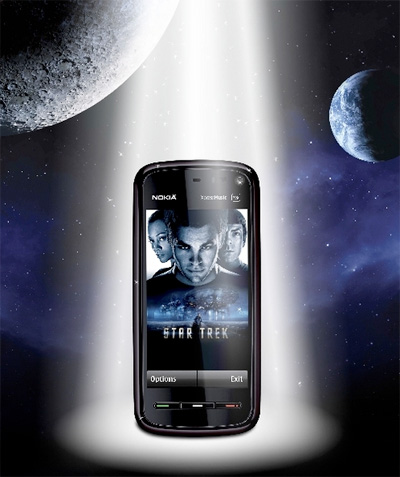 I’m not sure how I’ll adjust to having Sylar as Spock and Harold as Sulu, but the new Star Trek movie this summer is bound to be a huge hit with all the Trekkies in the audience. If you’re looking to expand your allegiance to the Trekkie universe, you may want to consider the new Nokia 5800 Star Trek Edition cell phone.

As you may recall, the Nokia 5800 XpressMusic was the first touchscreen cell phone to ever come out of Nokia, marking quite a leap for the Finnish phonemaker. The handset previously known as the Nokia Tube has been out for a little while, so it’s understandable that they want to give it a refresh. And an intergalactic one at that.

The Nokia 5800 Star Trek Edition will be given out for free through Vodafone, Orange, T-Mobile and O2, assuming that you’ll sign the qualifying contract. The phone comes preloaded with Star Trek screensavers, wallpapers, and ringtones.

In case you come across some alien civilization at the movie theatre and they don’t appear to be playing nice with the other people in the lineup, you’ll be glad to hear that this special Nokia 5800 also features a phaser application. Yes, try to phase that Romulan away with your phone.