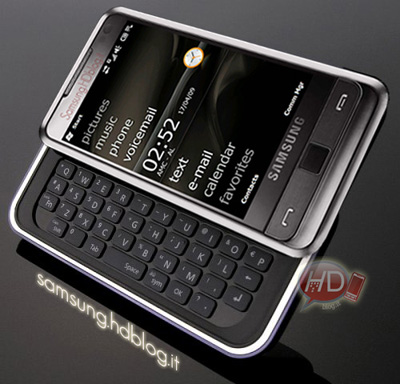 Other people may disagree, but I still believe that there is no touchscreen that will ever truly replace the utility of a hardware QWERTY keyboard. I like having the true tactile feedback and the ability to have my thumbs touch the keys without something actually being typed. The response is just better. At least for me.

The lack of a keyboard may have been one of the things holding the original Samsung Omnia back from international acclaim, so it seems that Samsung is adding some sliding QWERTY for a new Omnia Pro.

This handset isn’t anywhere close to being confirmed by the popular Korean manufacturer, but this concocted product shot looks like it could be a very real possibility. Still very much in the rumor stage, the so-called Samsung Omnia Pro continues with Windows Mobile 6.1 Professional. That looks like WinMo 6.5 in the pic though, doesn’t it?

Rounding out the spec sheet is a 3.5-inch WVGA AMOLED touchscreen display, 5 megapixel camera, and probably the usual slate of multimedia and entertainment utilities. The current rumblings are pointing toward a launch in Q4 of this year, but we won’t know for sure until Samsung comes out in the open with this new rumored hotness.