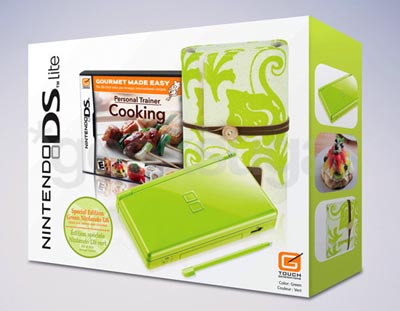 When the Nintendo DS first hit the market, we were told that Nintendo would continue to support the Game Boy Advance. They did, but it was very clear that the company was trying to steer you toward the new hotness. With the arrival of the DSi, we assumed a similar transition period would take place, but bundles like this steer us back into the past again.

As much as Nintendo would love for you to buy a brand new DSi, I guess they’re happy if you get a DS Lite too. Hence, they’re launching a new lime green DS Lite bundle next week. The brightly colored gaming device will come packaged with a copy of Personal Trainer Cooking.

This “game” isn’t exactly the same thing as Cooking Mama. It’s more of a real cookbook with real cooking advice and such. I’m not entirely sure if a bright lime green handheld would appeal to the rising chefs in the audience, but there you go. Also included in the bundle is a fashionable protective case.

If you’re looking to get into Nintendo handhelds but you’re not quite as interested in the DSi, I suppose you can consider the lime green DS Lite bundle starting next week. Look for it to drop in US stores on or around May 3.