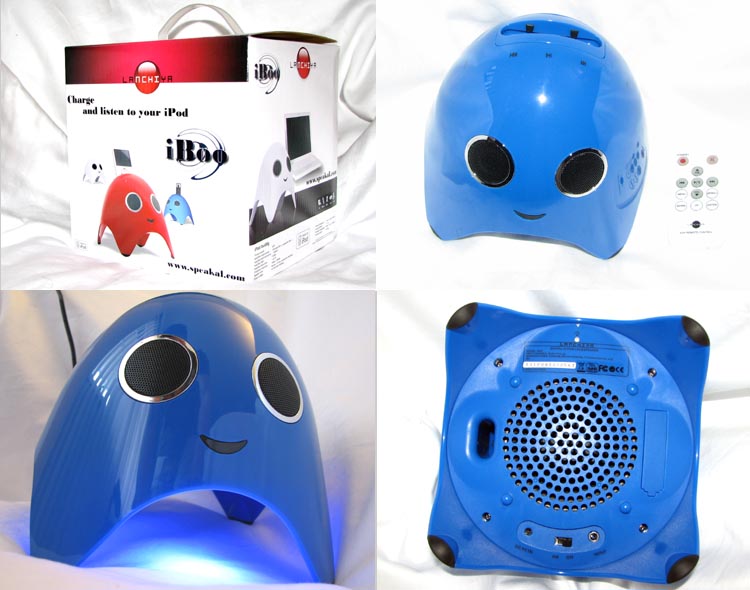 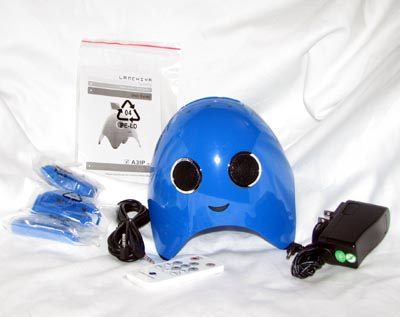 The original idea behind the iPod was that you were able to carry your music with you. While this is still the most popular way for people to use their iPods, the philosophy has quickly expanded into other, more social realms as well. There are plenty of iPod speaker docks and media-based head units for listening to iPod music in your car. In like manner, there is no shortage of iPod speaker docks for use in the home.

The variety of iPod speaker docks available on the market today is quite astounding, but very few are quite as cute as the iBoo from Speakal. Whereas most other speaker systems for the iPod actually look like speaker systems, the iBoo has been fashioned after a very cute ghost. It may have the appearance of a children’s product, but the technology here is totally grown up.

Compatible with all iPods that use the dock connector, including the iPhone and iPod touch, the Speakal iBoo is a 2.1 stereo speaker system and iPod docking station. Your iPod is conveniently docked on the top of the cute ghost’s head. The two eyes in the front, interestingly enough, are the pair of 3 watt stereo speakers. Housed underneath is the 9 watt subwoofer.

The Speakal iBoo, which is also listed as the AEIP iPod buddy, is available in your choice of red, white, or blue. The version that I’m reviewing here, as you can see, is the blue one, but it is functionally identical to its red and white cousins. In addition to support for iPods, the iBoo also has a 3.5mm auxiliary port on its underside, letting you connect this speaker to just about anything, including your notebook, cell phone, PSP, television, or DS Lite.

Unlike the iLuv iHD171 dock that I reviewed earlier this month, the iBoo will gladly charge your iPod while docked too. For me, this is an absolute must for any iPod docking station or speaker system. What’s the point if your iPod gets drained as it pumps out Nirvana, Green Day, and Frank Sinatra.

Opening up the box, you’ll discover the iBoo speaker dock itself, a set of dock adapters to fit a variety of iPods, the power adapter, instruction manual, 3.5mm audio cable, and the wireless remote.

I can’t be alone in this thinking. Although there is no official connection to Namco and the legendary Pac-Man series of video games, I think we can all admit that the iBoo bears a striking resemblance to Blinky, Pinky, Inky, and Clyde. I guess since I have the blue version of the iBoo, its closest relative would be the blue ghost from Pac-Man (Inky).

The adorable form factor is distinctly different from something like the Griffin Amplifi 2.1 iPod speaker system. That one was a classy black and grey box. This one is a cute ghost, so it’s quite clear that they are approaching wholly different demographics here.

Tapping the Top of His Head

Understandably, most of these simple desktop iPod speaker docks keep their controls as simple as possible. The Speakal iBoo much the same, except you won’t find much in terms of physical buttons here. There is a power switch on the underside, but the main controls are actually located on the top of the iBoo. And they’re “humanized” touch-sensitive controls.

The volume controls are on either side. The play/pause, back, and forward controls are in the center, in front of the iPod dock portion. Each of these “buttons” are seamlessly integrated and come with clear, but unobtrusive black markings. They blend in particularly well against the darker blue iBoo, but they’ll stick out more on the white one.

While the provided wireless remote control may appear to be pretty standard issue with its credit card-style thin profile, it does offer one feature that sets it apart. In addition to replicating the basic controls on the iBoo itself, the remote also gives you the ability to navigate through your iPod’s menu. This is great, because you can jump to a different artist, adjust the equalizer, or select a new playlist on the fly.

On the underside of the iBoo is a single blue indicator light. This doesn’t pulse with the music, unfortunately, but it does create a cool “underbody glow” when the speaker system is in use. Since the iBoo’s body is elevated from the ground (or table) with its four feet, the glow is quite the cool effect.

So, how does this sucker sound? The bass isn’t quite as impressive as the mStation 2.1 Stereo Orb, the sound quality and loudness offered by the iBoo is quite good for the type of speaker system that it is. The bass is pretty good still and unless you’re a big fan of big-thumping hip hop (for example), you may prefer the more even soundscape offered by the iBoo.

Yes, the sound is a little flat, but I’m reasonably happy given the small stature of this ghostly speaker system.

The Speakal iBoo is one attractive iPod docking station. As a speaker system, the sound quality doesn’t really disappoint and you should be pretty happy with what this little number is able to offer. Yes, it only has a total output of just 15 watts, but you get a 9 watt subwoofer in there for a fuller spectrum of sound. And this thing is so darn cute too, especially with the speakers for eyes and the blue underglow light.

Exclusively distributed by Lanchiya Technology USA, the Speakal iBoo carries a suggested retail price of $90. It’s not the cheapest thing in the world, but it’s not terribly expensive either. As a compact 2.1 system, the iBoo is a great addition to your creatively-oriented home.