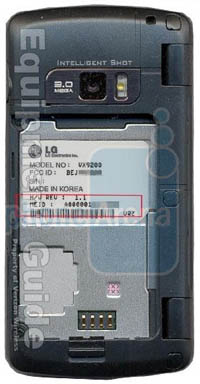 Although some people may feel otherwise, I think the LG enV2 from Verizon (and the nearly identical LG KEYBO from Telus/Koodo) was a very good messaging phone for when it came out last year. It’s not nearly as fancy as a full-fledged smartphone, but the keyboard is a blessing for text messaging enthusiasts. Well, we’re due for an upgrade.

We’ve managed to find a good look at the upcoming LG enV3 (VX9200) and one of the more notable upgrades is in the camera department. The LG enV2 came with a two megapixel camera that lacked a flash, much like the one you find on the Apple iPhone. With the LG enV3, it seems that we will be getting a 3MP camera instead and it will have an LED flash.

Shutterbugs will certainly appreciate the higher resolution, but it’s the flash that’ll make all the difference under low-light conditions. Taking pictures indoors will be a heck of a lot easier. You’ll also notice the “Intelligent Shot” marque above the camera.

It’s not entirely clear what this means. It could represent some image stabilization, face detection, auto focus, or any number of other things. We’re left to speculate, but it’s good to see that the enV3 is moving a step forward from its predecessor.