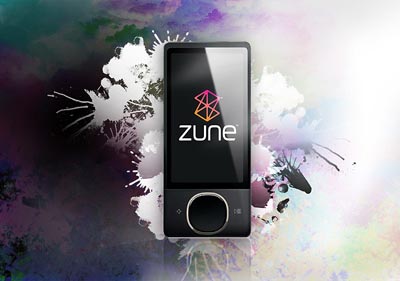 It doesn’t make perfect sense why Microsoft would call this latest device the Zune 3rd, since it is really only the second-generation flash-based Zune, but here it is. This isn’t an official promotional shot of the upcoming music player, but the aesthetics are well in line with what Redmond, Washington may produce.

I guess the Zune 3rd name is justified since this is really the third generation Microsoft Zune, but the first generation did not include a nano-sized flash-based Zune. The first-generation Zune was only the larger number and it was when the second-gen came around that we were introduced to the Zune 4/8/16.

Just as that first “Flash” Zune mirrored the look of the previous generation Apple iPod nano, it seems that Zune 3rd will be in line with the current fourth-generation iPod nano. The edges are a little rounder and the display has a much wider aspect ratio, presumably for landscape-oriented video watching. The Zune Pad remains intact.

There’s no word on when (and if) this new Microsoft Zune will hit the retail channels, but I’m betting on a simultaneous launch with the rumored Zune HD that we spotted last week.