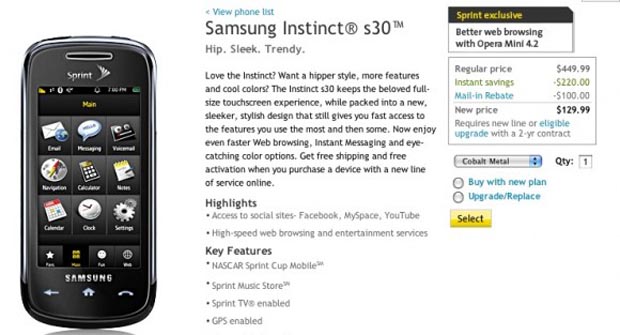 It was just under a year ago that we were formally introduced to the first Samsung Instinct from Sprint and, a couple of months later, the touchscreen phone arrived in Canada. It was a valiant effort from Samsung, but I felt that it was lacking.

Rumors picked up about a possible Instinct Mini and those haven’t completely come to fruition. Instead, we’re getting an updated version of the phone in the form of the Samsung Instinct S30 through Sprint. This didn’t really come out of left field, but it’s good to see that the phone has now been officially released by the American wireless carrier.

The Samsung Instinct S30 doesn’t appear to be any smaller than the previous version, but it does come with a much more rounded appearance. The first Instinct had a square-ish footprint by comparison. Most of the main features remain the same, like having a touchscreen, GPS, quick access to messaging, and “faster” web browsing. You also get to choose from two colors.

The regular price for the new Samsung Instinct S30 is $449.99, but you can chop that down to a much more manageable $129.99 if you sign an eligible two-year prison sentence contract and take care of a $100 mail-in rebate.