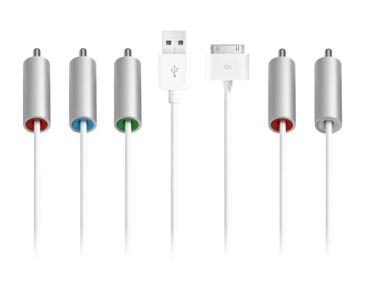 We all know that Apple will be unleashing a new version of the iPhone this summer and this highly anticipated handset is sounding better and better by the moment. We’ve already heard about possible upgrades like a 3-megapixel camera and video calling, but now we’ve got another juicy tidbit to consider.

You see, Apple has told its retailers to start putting the iPod AV cables on clearance. Why is this notable? Because they’re reportedly making way for a new set of AV cables that combine both composite and component video outputs into a single set of cables. These will function in much the same way as the component cables for the Xbox 360.

If you go with the composite configuration, you’ll get SD video as you’ve always had, but if you go with the component configuration, you can gain access to 720p and 1080i video output. That’s because, so the story goes, the new iPhone (and iPod touch) will be capable of doing some great HD video goodness. And it’ll output it through these new cables.

So, how does this relate to Apple TV? By the sounds of things, Apple will include a handy piece of software in iPhone 3.0 that “closely replicates” the functionality of Apple TV. In this way, you may be able to stream HD video content over a Wi-Fi connection, through your iPhone, and into your HDTV using the said cables. The Apple TV-like menu gives you access to not only locally stored media, but also stuff that can stream over Wi-Fi or 3G.

Chalk this up to rumor for now, but I wouldn’t put it past Cupertino to do this. Too bad for Apple TV. Too good for iPhone Next.