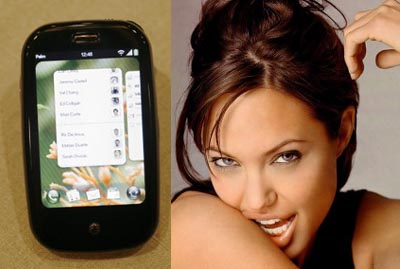 The Palm Pre isn’t officially available through Sprint just yet, but a handful of “beta testers” have been given pre-production models to use for the time being. One of these so-called beta testers is none other than Angelina Jolie.

The seductive actress has been using the Palm Pre smartphone for a little while and, by and large, she’s been happy with the experience. How she manages to use a cell phone with all those children around here never ceases to amaze me. No word on how Brad feels about the Pre.

So, what does Angie have to say about the Pre. She likes the phone, according to a production assistant on the set of Salt. She likes the software better than the software on the iPhone, in fact, and she’s a fan of the thumboard for the purposes of texting. Having a full QWERTY keyboard is nice, but she complains that the keys are too small.

In like manner, she thinks that the screen is absolutely beautiful, “but can too easily be scratched.” That’s what happens when you let your ankle-biters have at a beautiful piece of tech like that, Angelina.