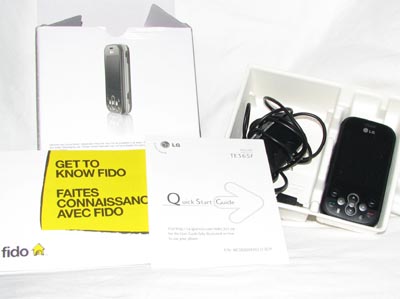 For a while there, it seemed like the CDMA side had a lock on the QWERTY “dumb” phone market. Looking to carriers like Telus and Verizon, you could find quite a few options when it came to conventional phones with full QWERTY keyboards. The GSM side lagged behind, only offering QWERTY if you’re willing to take on the increased complexity of a smartphone. That, of course, has now changed.

Fido may be a low-cost carrier in Canada but that doesn’t mean that they won’t throw this poor dog a bone. If you need some QWERTY and like a touchscreen, the LG Neon just may be the ticket. Also available through Rogers Wireless, the LG Neon is not supposed to compete against a BlackBerry or an iPhone. Instead, it’s a slightly beefier multimedia phone that happens to rock a slide-out QWERTY keyboard. Texters will find that quite useful.

Naturally, the most notable feature on the LG Neon TE365F is its slide-out QWERTY keyboard. This three-row keyboard will certainly come in handy for pumping out those text messages, instant messages, and emails. When you slide out the keyboard, the display automatically orients to landscape mode as well. The display also happens to be a touchscreen, but it comes with a few limitations that I’ll describe a little later in this review.

Other notable features on this multimedia and messaging-minded handset include tri-band (850/1800/1900) GSM/EDGE connectivity, Bluetooth, integrated MP3 player, FM radio, 2 megapixel camera (no flash), picture and video messaging, and an SMS conversation box. It’s nice to see a couple of notable basics like the MP3 player and digital camera, but there isn’t much here that’s going to floor you. At the same time, you have to realize that this phone only costs fifty bucks with contract. That’s pretty cheap.

Inside the box are the phone itself, a SIM card, charger, and supporting documentation. Even though there’s an MP3 player inside and the phone uses a proprietary connection, there is no provided headset. That’s what you get when you buy a budget phone, I suppose.

The first thing that hit me about the LG Neon was its weight. It’s actually quite a bit more substantial at 108 grams that what its cheaper appearance may lead you to believe. I’m not entirely positive if this leads to a better build quality, but it sure makes it feel like you’re using something a little more robust.

The choice of materials is similarly impressive with a rubber-like back for extra grip. The plastics used also appear to be quite good, especially when you remember that this is supposed to be a cheap phone for a budget carrier. The screen is quite large and, while it doesn’t have the best resolution, the screen is also reasonably crisp. Don’t expect the world, but I was surprised.

If you’re going to send a lot of SMS, IM, and email messages, a regular T9-style keypad probably isn’t going to cut the mustard unless you put in a fair bit of practice. QWERTY keyboards offer a much more user-friendly experience… but the one on the Neon isn’t so stellar.

Whereas the LG enV2 (known as the LG KEYBO in Canada) had four rows of square keys, the LG Neon has three rows of round keys. The “missing” row comes with some disadvantages, of course, but it’s more the layout that bothers me. I found myself hitting the Symbol key when I wanted the A.

Also, getting periods and commas are the alternate functions of H and G, respectively. That’s not very intuitive when we expect these punctuation marks to be mapped to the M and N kind of area. You may be able to get used to the layout eventually, but it wasn’t as pick-up-and-play as I would have hoped. 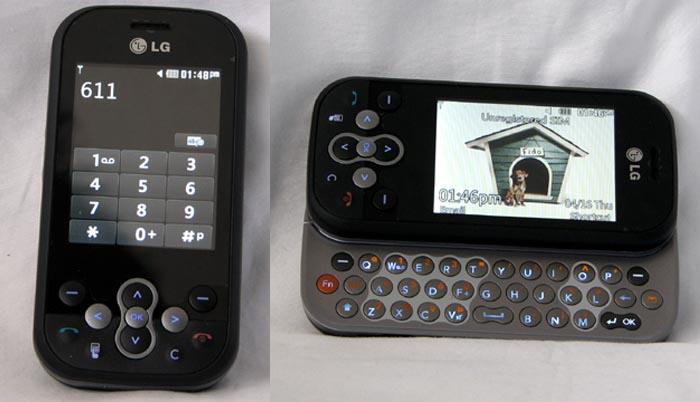 Touchscreen’s for Dialing Only

The LG Neon TE365F comes with a touchscreen display. That’s a good thing, because it adds all sorts of utility and functionality. Unfortunately, LG has decided to completely cripple this feature. When you are navigating through the menus, you can’t tap on an icon to access that item. When you are using the mobile browser, you can’t tap on a link to open it.

Instead, the touchscreen is only there for dialing phone numbers. That’s it. There’s haptic feedback, sure, but this is severely restricted for no good reason. Open up that software and let us use the touchscreen like how we would on any other touch phone, LG!

Out of Memory, Shutting Down

Another big point of disappointment was the lack of performance. Playing the included demo games was fine and playing tunes with the MP3 player was good, but web surfing felt quite crippled.

I logged into my Twitter account via the mobile Twitter site and that was fine. When I clicked on a TwitPic link from one of my friends, however, I received an error message saying the phone was out of memory. The handset then proceeded to reboot itself! Does TwitPic really require that much in terms of resources?

No, I didn’t expect the Neon to compete against my computer for processing power, but it should be able to access some basic web pages, yes?

This phone is clearly budget-minded for the budget-minded crowd. The QWERTY keyboard is a great inclusion, but the layout isn’t as good as some of its direct competitors. The touchscreen is a nice inclusion, but it is completely crippled in its utility. The build quality and materials are very good, but they add to the weight of the phone. That seems to be the nature of the Neon, since every good point comes with a “but” statement shortly afterward.

That said, if you’ve only got $50 to spend, you’re dying to get in on some QWERTY action, and you don’t need a world of performance, this phone could be a good bargain to consider.

The LG Neon TE365F QWERTY messaging phone is available through Fido for $50 with a qualifying two-year service agreement or for $175 outright. Get more information on Fido.ca.