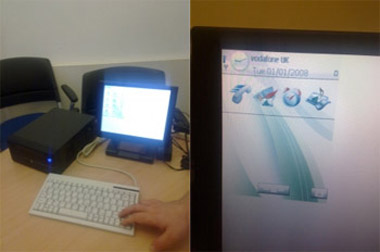 There’s some talk of using Google Android for platforms other than smartphones. Some people are saying that Google Android would be suitable for MIDs and netbooks, largely because its lightweight installation. What about that other smartphone OS that occupies a large part of the world?

I’m not exactly sure where they can take this, but a couple of “capable guys” were able to get Symbian S60 to run on a standard Intel Atom-based motherboard. The motherboard has not been modified, as far as I can tell, and it is of the usual off-the-shelf variety. An Atom-powered Symbian smartPC?

This is quite the feat, considering that Atom was never meant to power the Symbian operating system, but where do we go from here? The guys at SOSCO (S60 on Symbian Customer Operations) are at a loss as to what to do with their Symbian-based PC, looking to the community for feedback or what the next step may be.

For now, Lee Williams says that the user interface is very responsive and the upper application layers are impressive. That’s all well and good, but I still think that Symbian needs an extreme makeover, in terms of outward appearance, before it could be suitably used for a tablet or netbook.