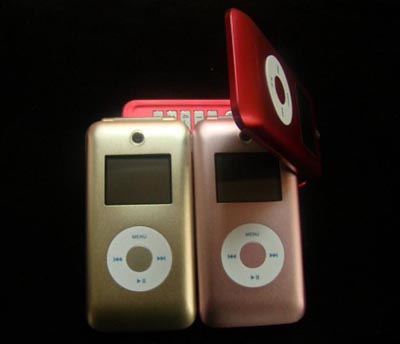 Rumors about the possibile release of an Apple iPhone Nano have been swirling around for just about as long as the iPhone itself has been in existence. Well, it seems like some people are tired of waiting for something official, so they’ve gone out to create an iPhone nano of their own. Or, they’re just trying to cash in on a little bit of popular confusion.

It’s not quite the real thing, but a Chinese company has decided to create what it calls the HiPhone Nano, a flip phone that clearly borrows some inspiration from Cupertino.

While in its closed position, you would almost assume that the HiPhone Nano is a slightly chubbier version of the iPod nano. There is a clickwheel-like interface on the front, but I’m assuming that the wheel is just five buttons rather than a touch-sensitive wheel. The small external display is pretty generic as well.

Flipping open the iPhone Nano wannabe, you’ll find a 2.4-inch touchscreen display and a standard numeric keypad. The rest of the features are pretty run of the mill, with the exception of dual-SIM support. On the bright side, this will be cheaper than any real iPhone nano.

The HiPhone Nano is listed at $124.99 and, as expected with most phones out of China, this price does not require a contract.