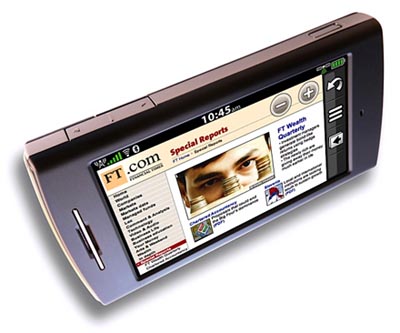 This has been far too long in the making. We first heard about Garmin’s official debut into the cell phone arena about a year and a half ago. We were pretty stoked, because it meant that we could finally get a capable GPS mobile phone direct from a company that specialized in that kind of thing. And then we waited. She saw shots of the vaporware and waited some more. Well, the wait may soon be over.

As you may remember, Garmin is teaming up with Asus to produce their co-branded nuvifone G60 and it seems that a launch date is being slated for some time in June. This release info has not been confirmed by Garmin or Asus, but a Reuters article is pointing toward a June launch for the highly anticipated handset.

I’m not sure if a June release is such a brilliant idea, since that is also around the same time that Apple will likely release its next-generation iPhone. You don’t want to place your first touchscreen cell phone next to Apple’s elephant in the room. To make matters worse for Garmin and Asus, the nuvifone G60 is apparently launching with AT&T too.

Yes, a great GPS phone with 3G and a big touchscreen from Garmin-Asus can be quite attractive and tech geeks like me will be definitely interested, but they’ve kept us waiting for a very, very long time already.