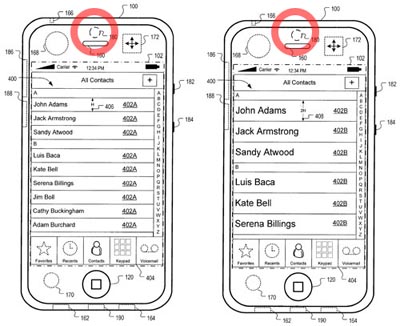 Another Apple patent has come down the chute and it seems to be pointing toward another new feature for the upcoming next-generation iPhone. We’ve seen a few other 3G-capable handsets from other manufacturers that are capable of doing video calls, so it only makes sense that Cupertino would consider the inclusion of this feature as well.

Looking at the patent filing by Apple, the new iPhone will apparently boast a front-mounted camera that could be used for video telephony. The hardware is simple and inexpensive enough to implement, but it’s the software that makes this leak a little more interesting.

In the patent, we hear about a new morphing interface that adapts to the motion of the user. What does this mean? If you happen to be bouncing along on a rocky bus, the icons on the screen may grow a little bigger so that they are easier for you to tap. I wonder if this could also be used for anti-shake functionality for the video calls too.

To make matters even more interesting, what if Apple was able to set up a seamless video conversation between an iPhone and a desktop-based iChat user? Would AT&T allow such a configuration?