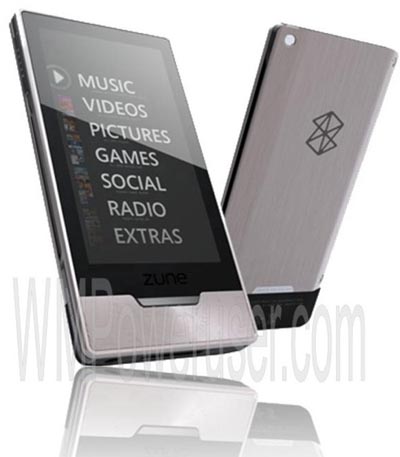 The Microsoft Zune hasn’t quite been as successful as the people from Redmond had hoped, but the next-generation music player could bring a lot more to the table that could turn some customers away from Cupertino. Maybe.

This is very much unconfirmed at this point, but we appear to have found some leaked renders of what the next Microsoft Zune will look like and what sort of specs it will be packing. For starters, the new Zune looks to be a fair bit slimmer and sleeker than its predecessor, but you’ll also notice that the Zune Pad is also gone.

If the rumors are to believed, that’s because this new multimedia player will come equipped with an OLED touchscreen display instead. Think of it like the iPod touch, only with OLED and a 16:9 widescreen aspect ratio. Some other “leaked” specs include an HDMI-out port, 16GB or 32GB of storage, and HD media playback. Yes, you can watch HD in the palm of your hand.

There’s also a mention of support for 3D Xbox games, possibly opening up the possibility of yet another App Store-like creation. The iPod touch can download games. The Nintendo DSi can download DSiWare. It would only make sense for the Zune HD to do the same.