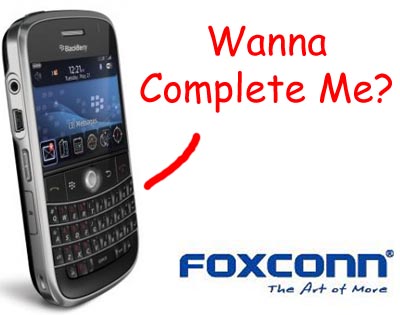 The recession is hitting everyone pretty hard these days and this includes the cell phone industry. It seems that Research in Motion, makers of the BlackBerry, is unsuccessfully looking for discounts from existing suppliers. So, RIM has turned to new suppliers to get cheaper parts.

Currently, many of that parts that go into the construction of a BlackBerry device come from firms like Elcoteq and Celestica, but they’re not able to budge much on the price of the components. They want to keep RIM’s business, but they can’t afford to cut into their bottom line either.

According to these reports, RIM has thus taken an interest in other suppliers and it seems that one of the frontrunners is Foxconn, a company that is already well versed in the manufacturing game for other firms. This could be a natural fit if Foxconn is able to provide less expensive components that can still hold up the quality name of RIM.

It appears that Foxconn approached RIM with the offer and not the other way around, so unless Elcoteq and Celestica counter with something, they could be losing out on quite the hefty Waterloo-based contract.