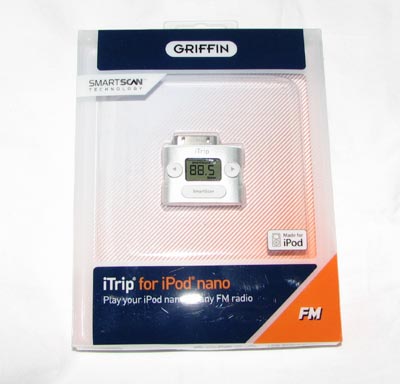 As you can probably fathom, this is far from the first time that Griffin has come out with an iTrip FM transmitter for the iPod. In fact, they already had an iTrip for iPod nano four years ago. That’s not to say that the FM transmitters of yesteryear are quite the same thing as today. Griffin is always working to make these little musical attachments a little better and now we’ve got yet another one to consider.

The latest addition to the iTrip line of FM transmitters from Griffin Technology is the aptly named iTrip for iPod nano. This version has been designed to work with the recently launched iPod nano 4G, since its overall styling and lines fit perfectly with the new music player.

It almost looks like an extension of Cupertino’s product, but it will easily work with any other dock connector-style iPod as well. For the purposes of this review, I used it with an iPod nano 3G, but it’ll work with most current iPods (and presumably the iPhone) as well.

The newest iTrip nano does exactly what you expect it to do. You play your favorite music from your iPod and those tunes get magically beamed over the FM airwaves to your car stereo, clock radio, or whatever other FM radio-receiving device you happen to be using.

Unlike the Griffin iTrip Auto SmartScan and other similar FM transmitters, the iTrip nano does not need to be plugged into your car’s 12V port (cigarette jack). It draws its power directly from the iPod and this works as a double-edged sword. On the one hand, you don’t have to deal with messy cables and other clutter. On the other hand, this reduces the battery life of your iPod, among other concerns that I’ll explore in just a moment.

The small and simple display also happens to come with a backlight, so it’s pretty easy to tune in to the right frequency under low-light conditions. There’s also the SmartScan technology in there to find the best frequency, as well as SmartSound technology for “clear audio under real-world conditions.”

As with most other Griffin products, the packaging for the current iTrip for iPod nano 4G is fairly straightforward. Within the mostly clear plastic box is a clear plastic tray. In said tray is the iTrip itself. Aside from this, there is a small instructional booklet. You really don’t need anything else, because there is no battery to be charged or any cables that need connecting. Everything you need is in that matchbook-sized FM transmitter.

On the iTrip nano, you’ll find just three buttons. There are the left and right arrows for selecting your preferred FM frequency and then there’s the SmartScan button if you want the transmitter to find the best signal for you. There is no power button, because the iTrip automatically turns on when you start playing the tunes on your iPod. Nothing could be simpler and that’s exactly how an FM transmitter should be. Keep it simple.

Whereas some of the other SmartScan-equipped FM transmitters from Griffin give you the ability to save three scanned FM frequencies, the iTrip nano just finds one. If you don’t like it, press the button again and it’ll find a new one.

For me, the SmartScan technology is still a little hit and miss, so you are still better off doing some manual tuning to find the best non-station to use for your iTrip. I appreciate the technology and the sentiment, but the SmartScan still tuned in to some less than desirable frequencies when I used it.

In general, FM transmitters that run off their own power or the battery of the connected MP3 player don’t perform as well as the ones that draw their power from a 12V outlet. While the iTrip nano is a little better than some of its predecessors, it’s still not as good as an FM transmitter that plugs into the car’s power jack.

This is exactly what I expected, given my experience with the iTrip Universal and Griffin RoadTrip. The convenience of a cable-free experience is nice and the signal strength is decent, but I still picked up occasional static and distortion with the iTrip nano. For example, I’d get momentary static when my windshield wipers swept the rain away.

For this very important reason, I still prefer a more powerful FM transmitter over one that is slightly more convenient.

The newest addition to the iTrip family is slick, sleek, and easy to use. It complements the fourth-generation iPod nano perfectly, but you can easily use it with most other iPod models. The SmartScan technology is handy, albeit flawed, and the controls are about as straightforward as they can get.

If you want something simple and don’t want to mess with cables and other connections, the iTrip nano is easily your most convenient option. You just have to know that some sacrifices are made in terms of signal strength and fidelity and these simply cannot be overcome without an FM transmitter that plugs into your car’s 12V outlet.