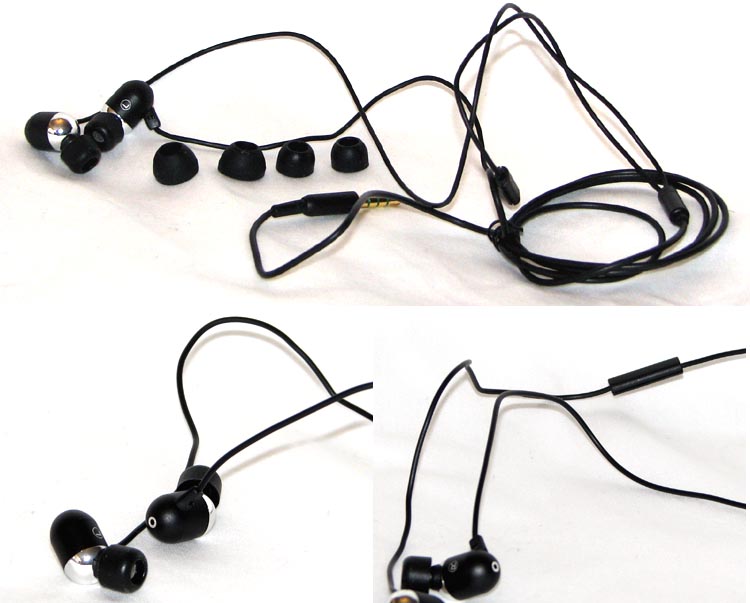 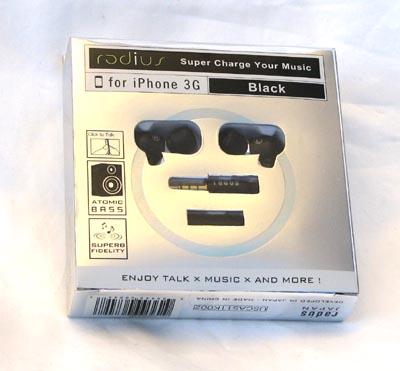 When you invest in a new MP3 player or music phone, there’s a good chance that the included headset leaves a lot to be desired. Sure, it’ll put the sound from your device to your head, but there are a lot of fantastic upgrades out there. Unfortunately, not all of us want to spend that much money on a set of earphones.

Until I was provided with this set to review, I had never heard of Radius. Now that I have had a chance to try the Radius Atomic Bass earphones, I’ll be sure to keep an eye out for what else this company has to offer in the future. On the surface, the Atomic Bass looks like any other set of in-ear headphones, but you also have to realize that they’re about half the price. It’s also quite notable that they’re made in Japan, so that speaks to their design and quality as well.

In and Out of the Packaging

I was not terribly impressed with the packaging from Radius. The earphones come wrapped up in a shiny silver box and it comes with the usual set of information on the box, but there was something about its appearance that made me think that was a cheap knockoff product. It almost made me think of those remarkably inexpensive knockoffs that you’d find at a night market or on eBay. Not good.

Thankfully, what was contained inside was a lot more impressive. The little white tray inside isn’t all that impressive, but the Radius Atomic Bass earphones themselves felt very solid. The earpieces themselves feel very solid and the drivers are at a slight angle. This way, they’re presumably easier to insert into your ear canals. The metallic buds also add a touch of upper-class quality.

The cable is thin, but it feels good. The 3.5mm connector at the other end is also gold-plated, adding another touch of quality. And yes, it’s been designed in such a way that it’ll work with the iPhone and its recessed headphone jack. You’ll also find a couple of extra sets of silicone caps, so you should have no trouble getting these to fit well in your ears.

With or Without the Microphone

The version that I got to review was the Radius Atomic Bass for iPhone and it comes with an inline microphone and remote control. This mic, obviously, can be used for voice calls on your iPhone. It’s also compatible with certain other phones as well. The site lists compatibility with the BlackBerry Curve, but I had no trouble getting them to work with the BlackBerry Pearl Flip too.

If you’d prefer to save ten bucks, you can opt for the regular Radius Atomic Bass. These are identical, except there is no in-line microphone.

Rattling My Noggin with Atomic Bass

Given their relatively small stature and inexpensive price point, the Radius Atomic Bass earphones didn’t really spark the biggest of expectations from me. I thought they’d perform like any other cheaper set of earphones, but oh boy was I impressed. I’m not even kidding when I said that my head was rattling the first time I tried them. Radius isn’t kidding when they say these have “atomic” bass. They’re not as powerful as ear-thumping deejay-style cans, but these are among the best in-ear style headphones that I have ever used.

For the first trial, I plugged the Radius Atomic Bass for iPhone into my laptop and let ‘er rip. Thump. Thump. Thump. These were loud, clear, and positively bumping. When I tried using it with my iPod, the bass was a few notches down, but this is to be expected. My laptop has a powered headphone jack and the iPod does not. Even so, there’s still plenty of bass in mobile mode.

The in-line microphone suffers from the same shortcomings as all other in-line microphones, so it’s not terribly sensitive and you may sound “distant” at times. It works, don’t get me wrong, but it’s not as good as a proper headset.

Celebs Are Impressed Too

And I’m not the only one who’s digging these Radius earphones. The marketing crew went out and asked some celebrities to give the Atomic Bass a try. From Warren Sapp to a Pussycat Doll very much loved the bass from these ‘buds.

If you’re looking for someone a little more knowledgeable, check out the video with actor Aaron Yoo. He’s a bit of an audiophile and in his video, he compares the Radius Atomic Bass with the V-Moda Vibes. As you may recall, I really liked the V-Moda Vibe Modaphones too and I’d say the Radius set easily competes against it.

The V-Moda Vibe retails for about a hundred bucks. In fact, most of these premium earphones (especially those with noise-isolation or noise-canceling features) sell for $100 or more. They can justify the cost because they really are better than their cheaper counterparts. That is, except for this set from Radius.

The Radius Atomic Bass for iPhone is listed at just $49.99. The mic-less Atomic Bass is $39.99. That’s a great value proposition, given the quality that you are getting. Don’t let the lesser-known name deter you, because Radius Japan is the real deal.