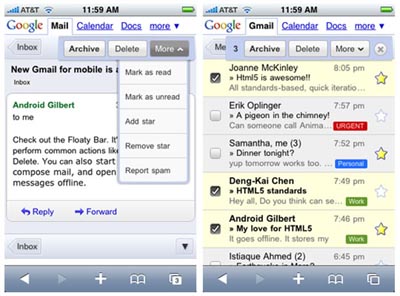 As nice as the old Gmail Mobile was for all the smartphone people in the audience, it still left plenty of room for improvement. Google has now stepped forward with a major revision for its mobile email service and I’d say it looks pretty slick.

The kicker is that this revision isn’t just about looks either. The new Google Gmail Mobile has a whole new interface, but it’s also designed in such a way that it’s faster to open an email message. The new revision also supports basic offline storage and allows for batch actions on your emails.

For example, instead of having to delete your messages one at a time, you can select a whole whack of spam emails and toss them in the bin all at once. The app for Android and for iPhone look quite similar, which makes sense since both phones have similarly-sized touchscreen displays.

The web app can make use of the iPhone’s internal database and Android’s mobile Gears support, so the email messages are cached inside your device. When you archive or star a message, this is applied to your cached copy for an instant response. The change to the Gmail server happens in the background.

Check the new Gmail for Mobile through the official walkthrough video below.