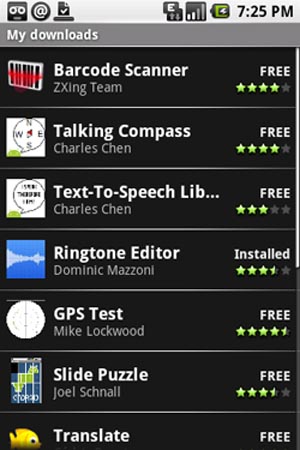 We all know that the iTunes App Store for the Apple iPhone is remarkably popular, but as it turns out, it’s not quite as popular as the Android Market. Obviously, this isn’t in terms of total cumulative downloads, since there are more iPhone owners out there than people who rock the T-Mobile G1, but when you break down on a per device basis, the G1 users are more enthusiastic about downloading.

According to a recently released report, G1 owners download an average of more than 40 apps to their devices. These applications range from barcode scanners to fun games, productivity tools to useless distractions. By contrast, iPhone owners have an average of 37 applications that they have downloaded from the App Store. The difference isn’t huge, but it’s there.

That said, we should be taking this report with a grain of salt, since it was commissioned by the folks at T-Mobile USA. Right, because there’s no conflict of interest there, since T-Mo is the only one selling the G1 these days and they have no reason to compete against the iPhone from AT&T. Nope, no conflict of interest at all.

Even so, these figures are quite noteworthy. That’s a lot of apps being downloaded, showing that these microtransactions are definitely the way of the future. Further still, 80% of G1 owners are downloading at least one Google Android application each and every week. Will BlackBerry’s App World see the same kind of success? Given the established user base for RIM’s smartphones, I can’t see why not.