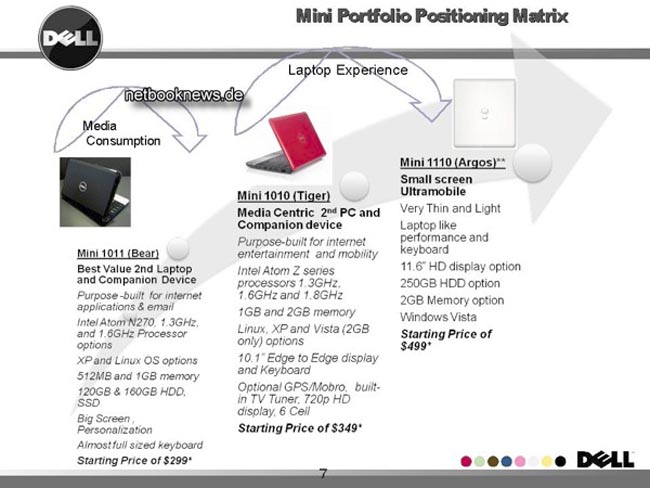 Dell’s roadmap for upcoming netbooks has been leaked onto the Internet and it comes with quite the notable surprise. Not only have we been introduced to the upcoming Dell Mini 11, but we’re also learning that it can be loaded with Windows Vista.

Now, the Dell Mini 11 certainly won’t be the first netbook to come with Windows Vista, but it’ll be the first time that a Dell netbook comes with that option. Remember, this should be just an option, so if you’re concerned about lagging performance, you can presumably downgrade to Windows XP instead. Alternatively, you can load Windows 7 on your own, but it won’t come that way out of the box.

As you can see below, the Dell Mini 11 (Argos Mini 1110) comes equipped with an 11.6-inch widescreen display and it’ll give you option for an HD display, presumably at 720p. It’ll offer a “laptop-like performance and keyboard” to accompany the 250GB hard drive and 2GB of RAM. Pricing is slated to start at $499.

Also on the same leaked roadmap are a pair of Dell Mini 10 netbooks. The Mini 1011 (Bear)is supposed to provide the best value with an Intel Atom processor, XP or Linux, 512MB or 1GB of RAM, and an almost full-sized keyboard. You also choose between 120GB HDD, 160GB HDD, or an SSD. Prices start at $299.